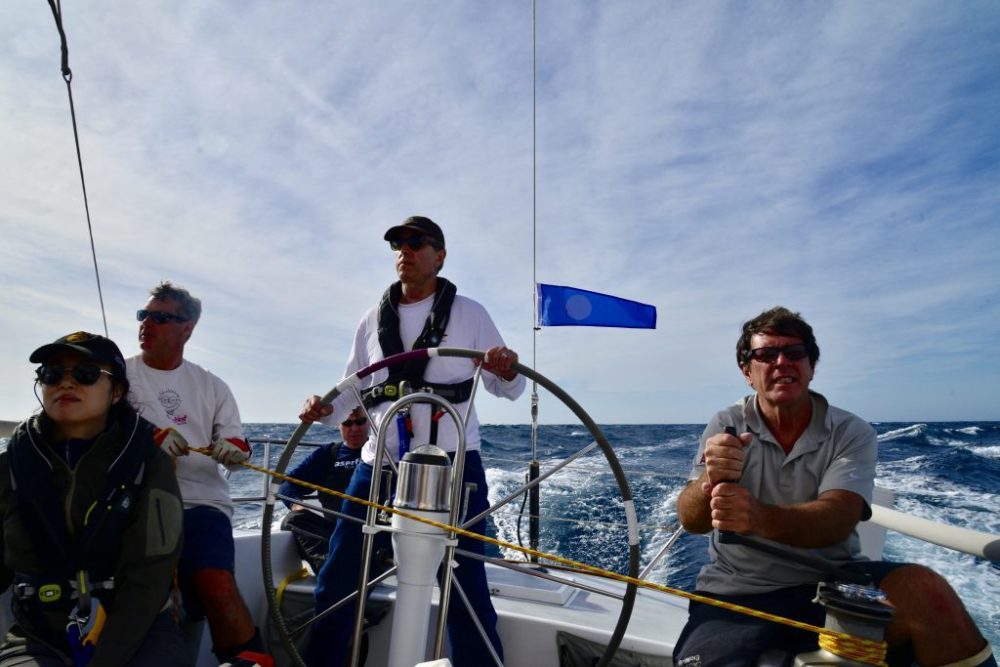 Over the last 24 hours we continued our astounding progress, racking up another 250 miles. About noon yesterday, we executed a “jibe” which is a down wind sail position change. On a boat this size, such an action can be hazardous so we called an “all hands on deck” to ensure its graceful transition. With this crew it was poetry in motion – a well executed choreography. We will continue on that “board” for another 10 hrs averaging 11 knots or 12.5 mph. 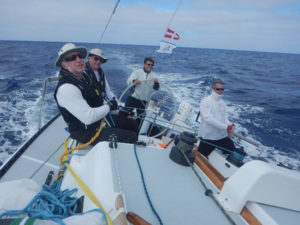 Last night we had an excellent dinner of steak, baked potatoes and spinach. It was prepared by Brian McKeever while sailing through rolling swells of 5 – 6 feet.

Then the first watch came on at 8pm until and remained until 12 midnight. When they went below and the second watch came on, we were hit by a squall. I was not on deck, but I heard great noise of waves pounding the hull and anxious shouts from above. My brother Tim – a seasoned sailor from the East Coast – actually questioned the wisdom of embarking upon this adventure from time to time. If I had been on deck, I would have suggested that we reduce sail area and maybe take down the spinnaker – a large parachute sail attached to the front of the boat. But instead we just accepted the challenge and continued the course. I think we made fantastic time during the brief 20 minutes the storm lasted.

A few minutes after I came up I got hit in the chest by one of our namesake – a flying fish. Perhaps it was searching for its mother ship.

In several hours we will jibe again to a course of a down wind run which will take us the last 600 miles to Hawaii.