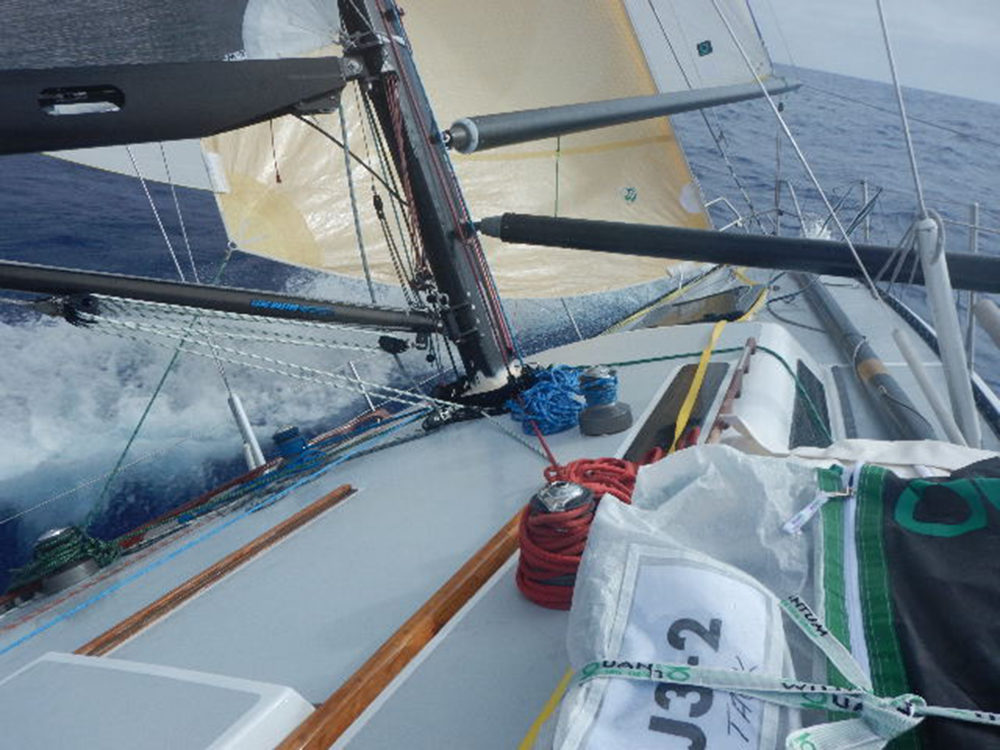 Thursday morning started on a bright note. It was the birthday of a crew member Bob Piercy. We planned a small surprise party for him to coincide with the change of watches at 8:00hrs. Bob grinning broadly, revealed that his birthday wish was for more wind.

The winds were medium strength but steady. Our navigator Richard Whiteley had discerned a course that had given us an advantage over other boats and enabled us to pass 2, although 1 was in a different class. Our spirits were raised considerably at the prospects of improving our standing in the race. (Sailors are an optimistic bunch, especially on the subject of wind.)

Sailing along enthusiastically at about 10 knots, our conversations often centered on the subject of environmental protection. This morning’s subject included the topic of Gyre an area of several hundred square miles located a few thousand miles north of our current position – about 24 degrees north latitude – and approximately equidistant between Asia and Canada. Gyre, as it is called, is the final destination for all of the Pacific’s non-biodegradable waste. It is a huge collection of plastic material and styrofoam packing material and is located just far enough from land that no government or NGOs can travel there and return having collected it. So it just sits there and expands. All of us onboard the Flyingfiche II vowed to use plastics as seldom as possible because what we use will probably end up there.

Onboard, we toss all biodegradable into the ocean, but everything else we carefully pack for disposal when we reach Hawaii.

Back to racing. Mid-afternoon, both the wind and our speed drop into the low single digits. The high-pressure zone we have been skirting around has shifted and we find ourselves in the middle of it. We change our course from the south heading to a westerly direction. We find it ironic that the one area we thought we could count on the wind was the calmest part of the race. By changing course, we’ve picked up several knots. Although at this point we don’t know our position relative to other boats, we feel we are back in the hunt.

We continue for several hours until dark, when we are hit by the weather and a few squalls to make the ride exciting and make up for a lost time.

The moon although in its waning phase shown brightly enabling some excellent pictures.